Note that in the comics and in various descriptions on the Internet, Red Ronin is described as being “over 100 feet tall” and weighing “in excess of 23 tons.”  In Avengers #198 and #199, his depictions vary in size quite a bit, and at one point it is said that with each step he moves “a quarter mile.” Here’s a shot of him where he is clearly much, much larger than 100 feet.

In the end, I decided to make him smaller than the 1/4 mile step version but bigger than the 100 foot tall version: I made him 400 feet tall.

The robot is controlled by wearing a “cybernetic” helmet that links the controller to Ronin’s combat and movement systems. The control room, located inside Ronin’s “head”, houses the cybernetic helmet as well as various video screens that show the outside.

Red Ronin’s primary attack is with his ‘laser sword’, doing 5d10 Energy damage with 9 points of Armor Piercing. His shield contains the system spaces of the laser sword, making both the sword and the shield tied together with the Multi-Function gear modifier. The fingertips of each hand can also fire Power Blasts doing d10+2d12 Energy damage.

Red Ronin has a humanoid shape, with arms, hands, legs, and a head. See the MP vehicle rules on pg. 80 for more info about Limbs and Hands. His torso and his head are fixed in place, however.

There is an exhaust fan located in the head that is powerful enough to suck out gas, or intruders like Yellowjacket and Wasp. I used Repulsion Blast with the area effect modifier to model it.

There is a door at the bottom of his right foot that leads into a small interior room. Leading up and out of the room is a crawlspace that runs the length of the right leg, eventually getting to the control room at the top of the robot. If the door is opened, the intruder system will blast the person opening the door. 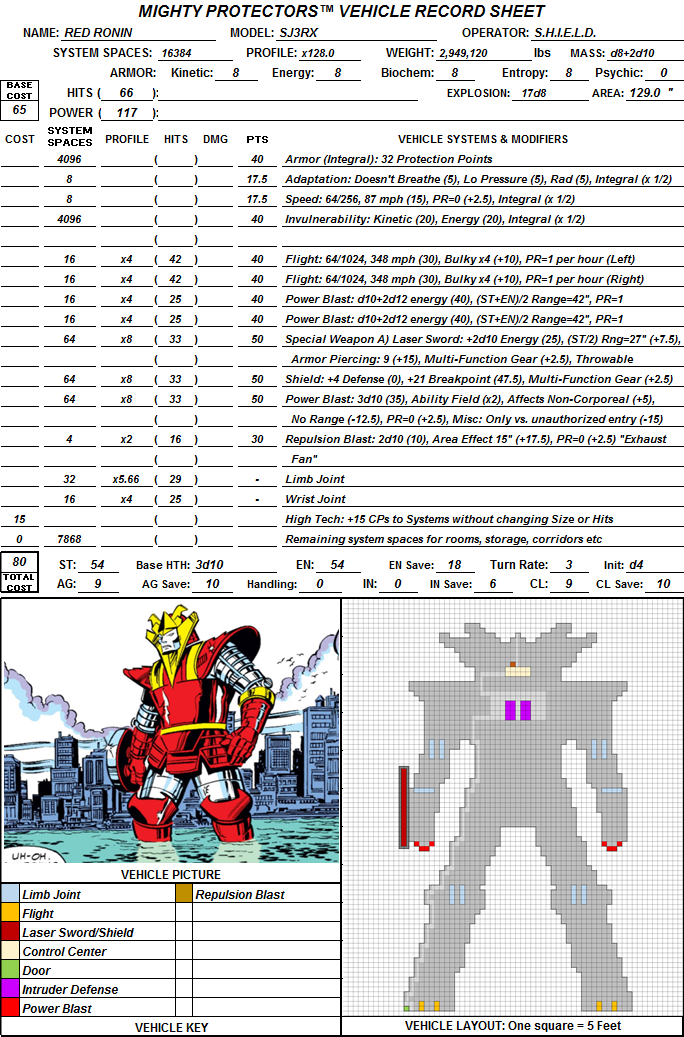