Here is my Mighty Protectors write-up of Legolas, one of the members of the Fellowship of the Ring. He is a Silvan Elf archer and Elven Princeling: he is the son of Thranduil, the King of the Woodland Realm of Northeastern Mirkwood.

The Elves of Middle Earth are highly magical beings with many abilities, which I simulate with an ‘Elf’ racial package. Elves are immortal, although they can be injured in accidents or killed in warfare (Adaptation to Time). Elves are highly agile (Ht. Agility), immune to cold temperatures, and can rest while awake, thus requiring no actual sleep (Adaptation to Cold and Sleep). They can move over surfaces, including snow, without leaving an impression, which I call “Move Without Trace”. They are highly resistant to certain forms of magic, such as the Fear generated by the Shadow Host on the Paths of the Dead, represented by the Invulnerability to Emotion ability. Lastly, Elves are keen of hearing and sight, represented by the telescopic heightened sense.

Legolas is a masterful bowman and highly skilled fighter, which I represent with Heightened Attack and Heightened Expertise, Class. He has a great knowledge of the history of Middle Earth, its creatures (in Moria he recognizes the Balrog), is incredibly good at balance and very stealthy, all represented with Knowledge A abilities.

He is armed with a great composite bow and single long bladed knife.

His mistrust of Dwarves is “bought off” fairly early in the adventure as he and Gimli (who also “buys off” his distrust of elves) become great friends. 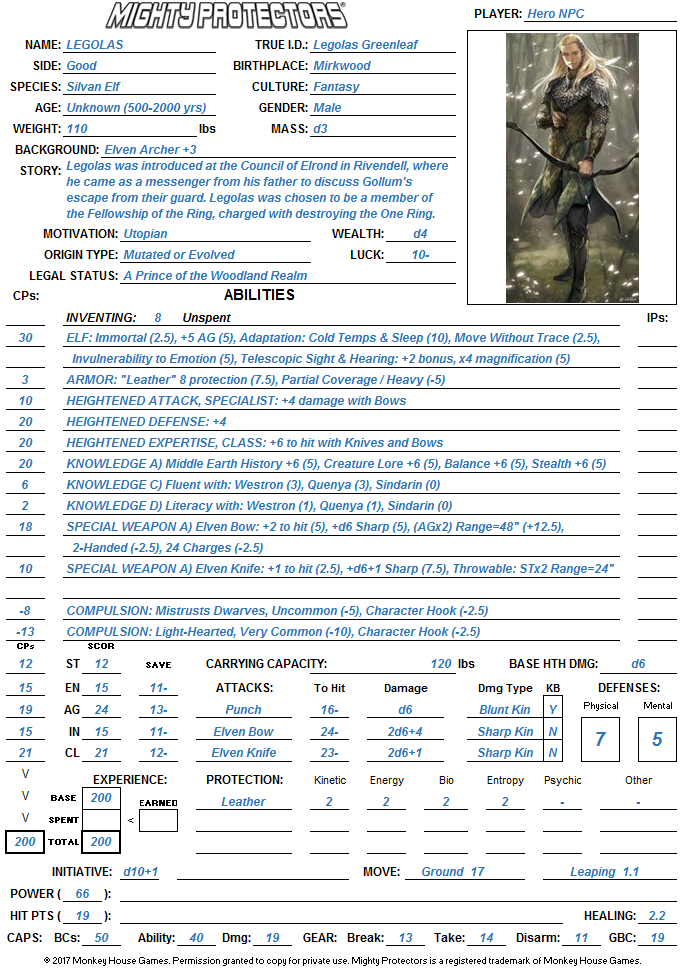 Legolas is a trademark owned by the Tolkien Estate.