Marvel returns to Conan in 2019. I always loved these books back in the day so to show my love, here’s the mighty Cimmerian as he might appear in the Mighty Protectors universe!

You may note that I added something called Knowledge A) Linguist. This is a minor ability (that I created) that reduces the cost of languages by 1 CP. I also modified his Adaptation: Doesn’t Sleep to require an EN save. This represents the fact that Conan can go days without sleeping. A GM running Conan as a character would want to penalize this EN save as time wore on to represent that even Conan at some point must sleep.

I made Conan ‘neutral’ because although he is often depicted as doing good deeds, saving prisoners (usually beautiful women) and such, he also kills a lot of people. Determining his motivation was a bit trickier, ultimately deciding upon Self-Defense. Conan is a free spirit, who lives life to the fullest, but he invariably becomes involved in the schemes of others or the vagaries of fate, and must defend himself.

Lastly, this version shows Conan as he was probably somewhere in the middle of the REH books. He hasn’t yet traveled the entire known world nor has he learned all of its languages, but he has been a pirate, a mercenary, and a thief — and would have all of the skills of those careers.

Also note that his “story” is cribbed from Conan’s description on comicvine.

Many of the stories written by Robert E. Howard, the creator of Conan, are in the public domain, and can be read or downloaded at Project Gutenberg. 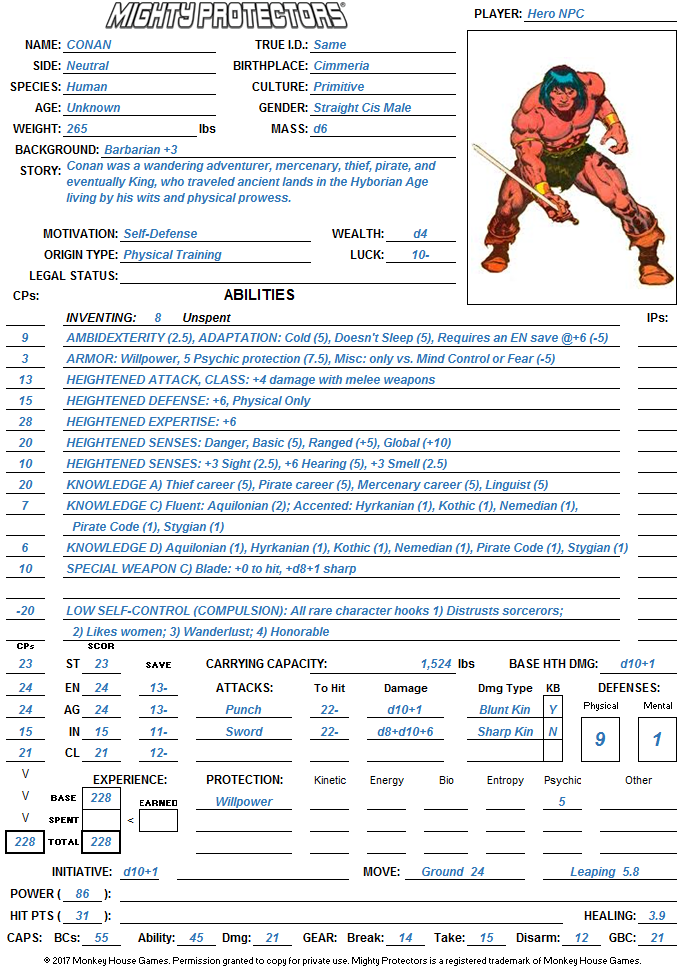 Conan is the licensed property of Paradox Entertainment, Inc. The images shown here are the trademarks of Marvel Entertainment. No challenge to this license or trademarks is intended.