I never bought, nor did I ever play, Marvel Super Heroes (MSH), but it remains a popular superhero role-playing game and has a ton of content that is available online at Classic Marvel Forever.

Shown below are rules to allow a prospective GM to convert an MSH character into its equivalent MP character.

MSH is often referred to as ‘FASERIP’. This is an acronym of the games primary stats, or ‘abilities’ as they are called in MSH. See the chart below to assign MSH stats to an MP character.

1) To convert MSH Strength to MP Strength, cross-index the MSH Rank with the MP ST column.

2) To convert all other MSH Abilities to MP Basic Characteristics, cross-index the MSH Rank with the MP BC: EN,AG, IN, CL column.

3) The Character gets Heightened Expertise, Class: +2 to hit with Melee Combat for each Rank Fighting exceeds his Agility.

4) The Character gets Heightened Expertise, Specialist +2 to hit for each Column Shift he receives with special attacks.

5) The Character gets Heightened Senses, Acute Sense +6 (5) for each Rank that his Intuition exceeds his Reason.

6) The Character gets Heightened Initiative +2 (5) for each Rank that his Intuition exceeds his Psyche.

7) Cross index the Rank of the character’s MSH Resources with the CPs/Wealth column to determine how many CPs of Wealth the character receives. Example: Wasp (Janet van Dyne) has Remarkable Resources or 15 CPs (d6+d8) of the Wealth Ability.

9) MSH Professional, Scientific, Mental, and Other Skills should be bought as MP Knowledge A, with each +1 CS equaling 2.5 CPs.

10) One ‘area’ in MSH equals roughly 18″ in the Mighty Protectors rules.

First off, there is no ‘Fighting’ stat in MP; it translates into CPs of Heightened Expertise, but only with melee attacks, and only if it exceeds the character’s Agility score (see Note #3 above). Electro’s Fighting rank is less than his Agility rank, so he gets no added bonus.

His powers include: Incredible Electrical damage, Unearthly Electrical resistance, and 6 movement Areas per round. Cross-indexing ‘Incredible’ damage on the MP Ability CPs column shows 24-29, so I’ll give him 25 CPs of Lightning Control A) Electrical Blast. Since he has Unearthly resistance to electrical damage and Excellent resistance to other forms of energy, I’ll just give him Invulnerability to the Electromagnetic Sub-Type of damage. Lastly, he can move along electrical sources of power (eg: power lines) at 6 ‘areas’ per round. This translates into 108″ of movement in MP, so I’ll give him Speed: 24/96/33 mph (7.5), with a modifier that it only works on electrical lines (-5).

Putting it all together, and adding a few details like a Multi-Ability for his electrical damage and his weaknesses, I end up with the following translation of Electro into the Mighty Protectors rules: 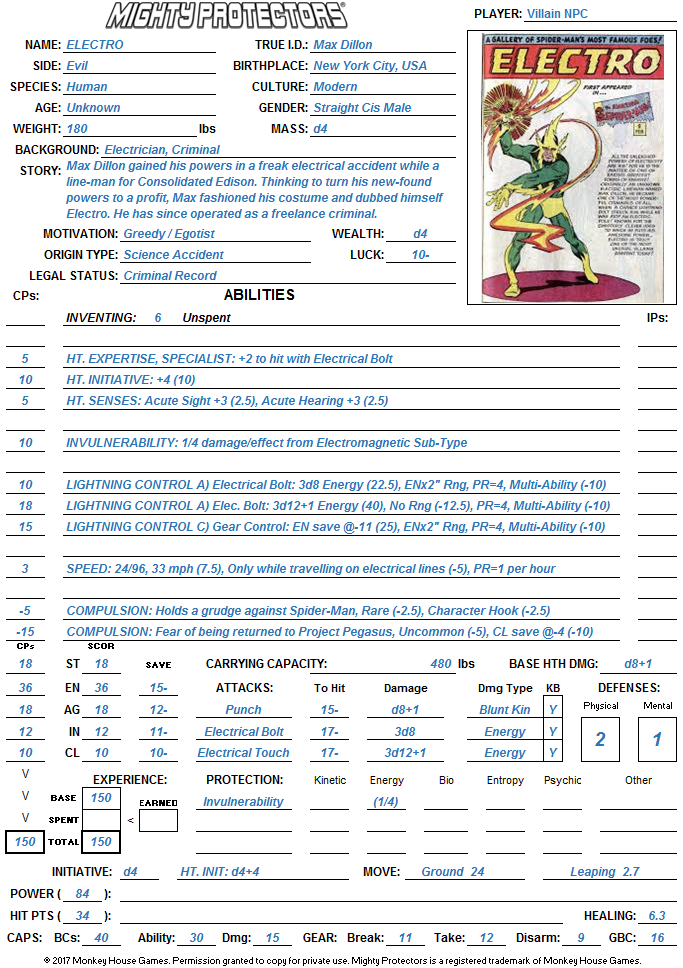 Marvel Super Heroes is a registered trademark owned by TSR Inc. TSR inc. is a subsidiary of Wizards of the Coast, Inc., a division of Hasbro, Inc.
Names(s) of character(s) and the distinctive likeness(es) thereof are Trademarks and © of Marvel Characters, Inc. and are used without permission.