While researching material for my War Heroes book, I ended up getting a really good deal on the entire run of Roy Thomas’s All-Star Squadron.  Although it was first published in 1981, the comic is set during World War II, and featured many Golden Age superheroes, including: Atom, Commander Steel, Dr. Mid-Nite, Hawkgirl, Hawkman, Johnny Quick, Liberty Belle, Firebrand, Pastic Man, Robotman, Shining Knight and the Tarrantula.

I plan on eventually writing-up most of these All-Star characters using the Mighty Protectors rules, but first up to the plate is Al Pratt — the original Atom.

At this point in his super-heroic career (at least from the retconned All-Star Squadron perspective) the Atom has no true super powers — he’s athletic and has been trained to fight by boxing champ Joe Morgan. He’s a sophomore in college but at some point he joins the Army, becoming a tank driver. Because he’s basically a normal guy with no real super-abilities I am treating him as a Low Power character, built on 100 total CPs.

The first Golden-Age appearance of the Atom was in All-American Comics #19, 1940. He appeared in more Justice Society stories than any hero except Hawkman. 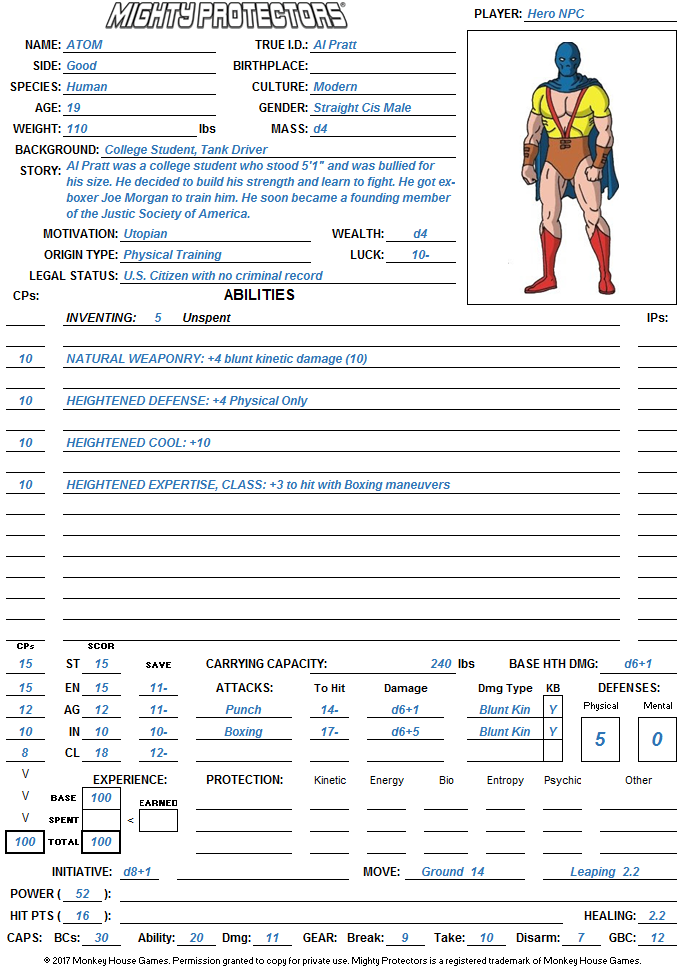 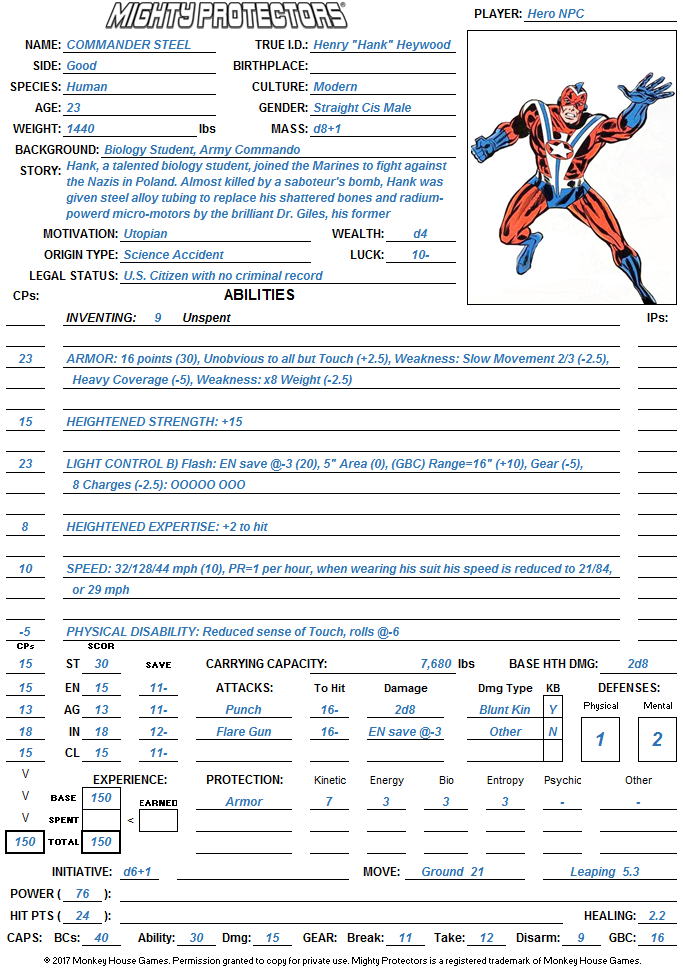 There is an excellent write-up of Steel’s origin at comicvine. Alternatively, you can just read the comic book panels below, taken from All-Star Squadron #8. 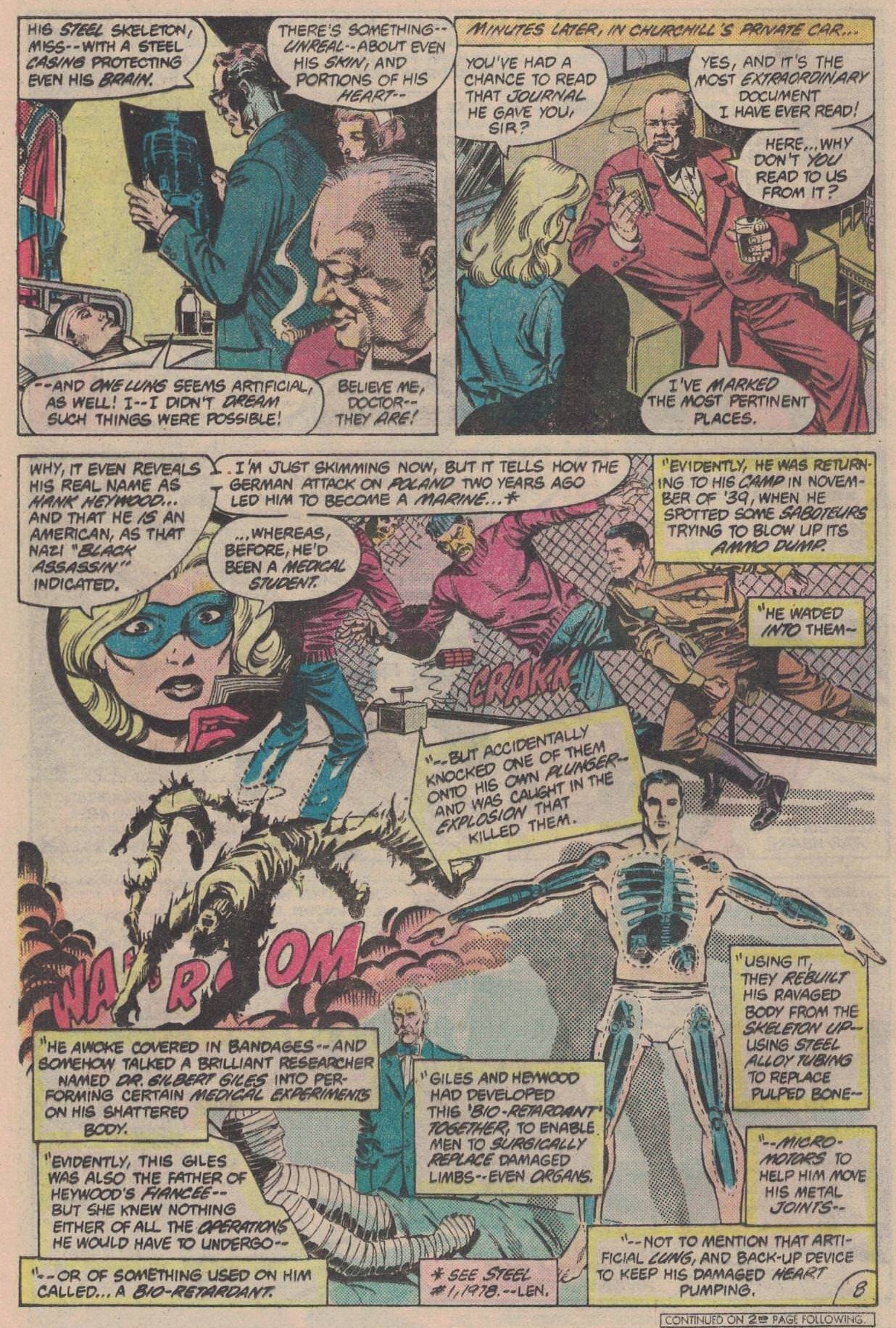 Hank Heywood is one of those typical golden age characters who is drawn as tall, handsome, and very athletic. So I gave him base physical stats to reflect that. But he’s also a Princeton college student who helped Professor Giles invent the “bioretardent” formula, so he’s also really smart.

Originally Steel, whose name is changed to “Commander Steel” in issue #8, was said to be able to lift “1000” pounds. Later, in the All-Star Squadron, he is described as having “super strength” and is shown crushing a pistol into so much junk. I assumed he would need to be able to average at least 9 points of damage to break a pistol, so I gave him enough strength to do that (the average of 2d8 is 9).

Steel wears a “steel-mesh” suit, that provides him with protection from at least small arms fire (pistols, rifles, etc.). But the suit is incredibly heavy, slowing him down and even heavy enough to put cracks into a concrete surface that he is standing upon. Thus, I built his Armor the way I did. Without his suit, he is subject to being damaged by bullets, as he is in issue #9 when he is knocked unconscious by Nazi guards.

He carries a “flare pistol” capable of blinding his opponents. I built it using Flash Control B, with range, gear, and charges modifiers.

At one point, in issue #8 I believe, he talks about how he can push his micro-motors to achieve a speed of 50 mph. Thus, I gave him the  Speed ability. Note that even while slowed down by his heavy steel-mesh armored suit, he can run at a top speed of 29 mph, or 58 mph if he “pushes”.

The Heightened Expertise and the Weakness of having a reduced sense of Touch round out his character and put him at exactly 150 CPs.