Libby Lawrence was a famous radio news reporter in the late 1930’s. When Poland is invaded by the Nazis in September 1939, her father is killed by an exploding bomb that was dropped by a Luftwaffe fighter. She becomes a fierce opponent of the Nazis, using her radio news broadcasts to inform the world of their atrocities. At one point, she is trapped by the Nazis in France, but she manages to escape their grasp by swimming the English Channel all the way back to England.

Once back in the United States, she meets with and befriends Tom Revere, the guard at the Philadelphia Courthouse where the Liberty Bell is kept. He gives her a tiny replica of the bell which she clips onto her belt.  Later she learns that when the bell is rung, she gains a rush of strength and speed.

She describes her origin in the comic panels below: 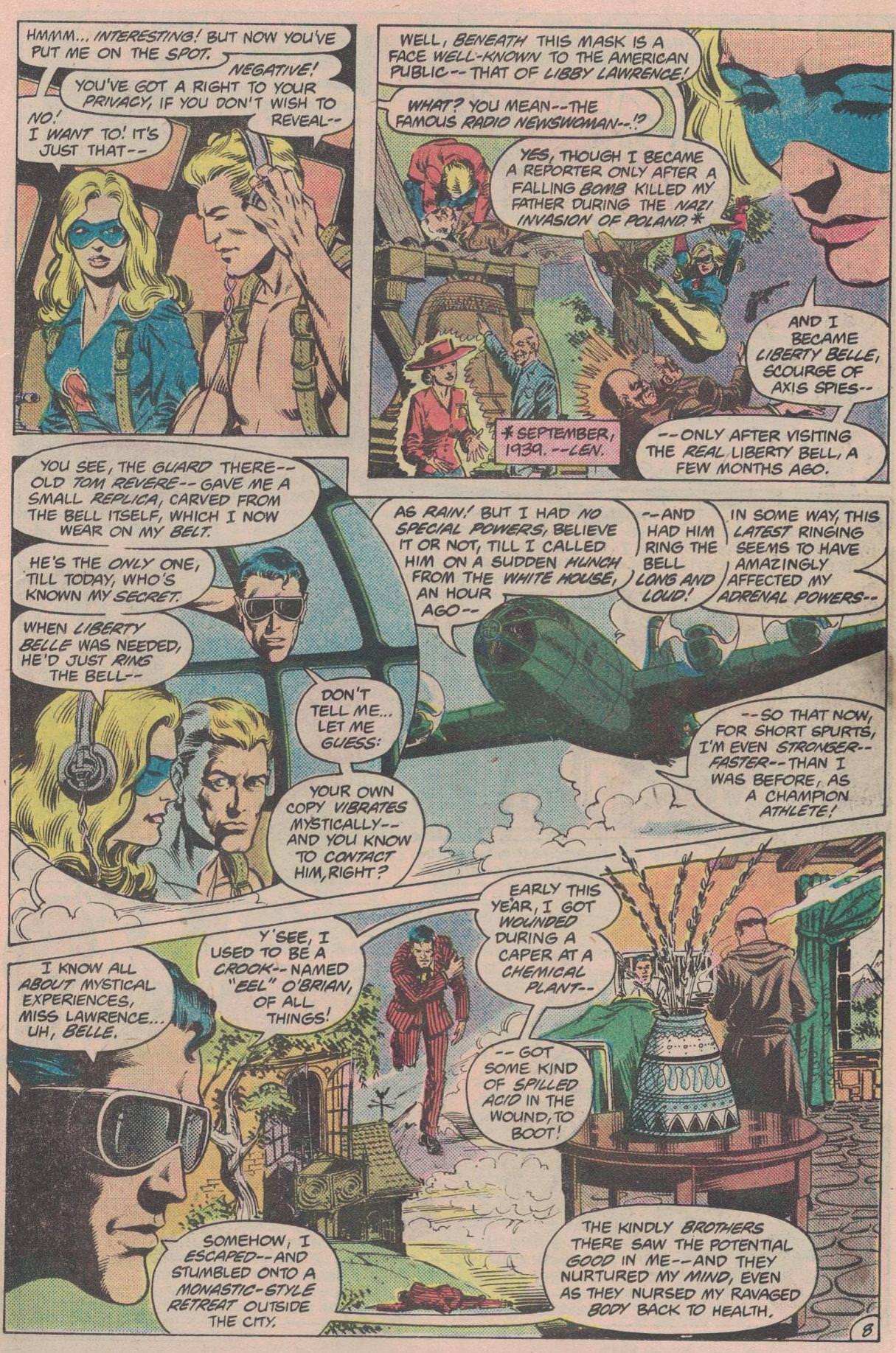 In All-Star Squadron #46, she gains a new super ability: a sort of sonic telekinesis. You can see her using her newfound ability against the Nazi supervillain Baron Blitzkrieg below: 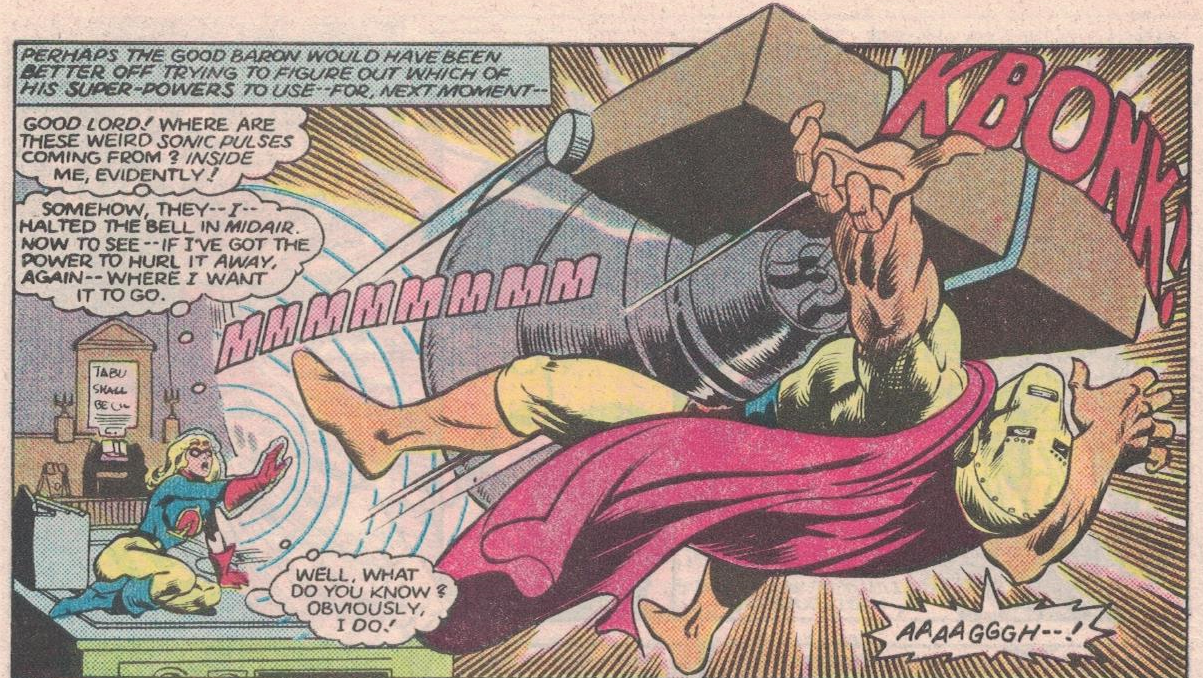 Liberty Belle is not terribly powerful. As such, I’ve constructed her stats and abilities using a “Low Power” level, with a total of 100 CPs. 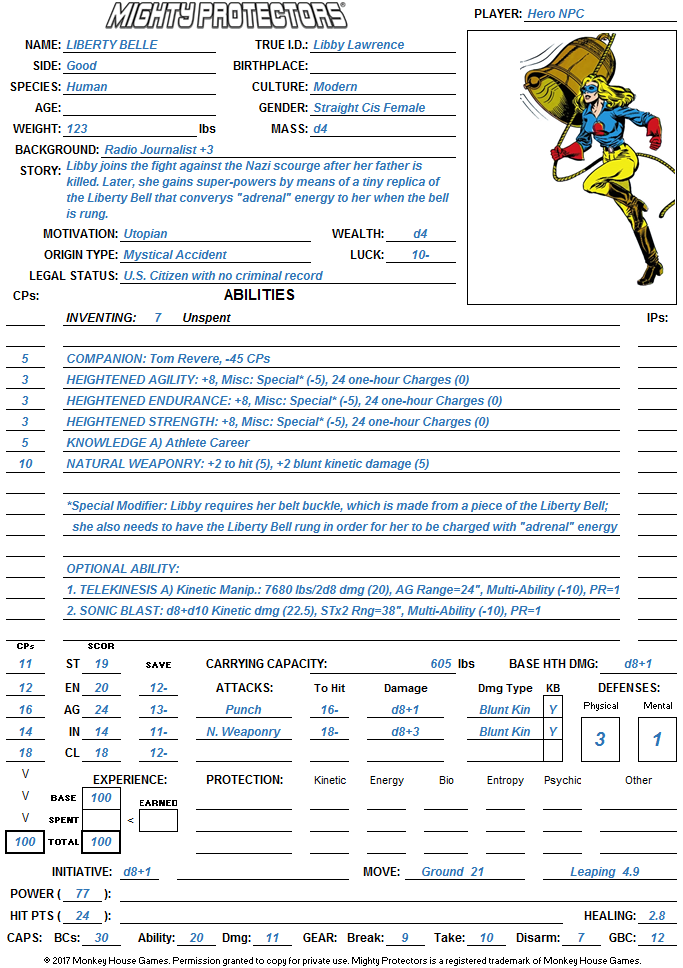 I gave Belle the Companion ability to simulate her friendship with Tom Revere, who is basically just there to ring the Liberty Bell when she needs her “adrenal” powers activated.

Libby only gains her sonic abilities after her friend Tom Revere is killed. So if you want to give her the optional Telekinesis/Sonic Blast multi-ability, you should also get rid of her Companion. Similarly, she no longer requires the Liberty Bell to be rung to activate her “Adrenal” powers… so get rid of the “Special Requirement” modifier and replace it with the Linked modifier.

Liberty Belle is a trademark owned by DC Comics