Here’s my late Bronze-Age, post-Crisis on Infinite Earths, Mighty Protectors version of the Man of Steel. I’ll be the first to admit that I’m not much of an authority on Superman, seeing as how I never collected the comic book. This write-up is more of an interpretation of his stats and abilities from reading about what his powers were like in that bronze-age time-period. He’s far less powerful than the Golden/Silver Age where he was sometimes shown dragging planets around, but he’s still super-powerful, especially from a Mighty Protectors point of view, where he stretches, but doesn’t break, the boundaries of what is possible. 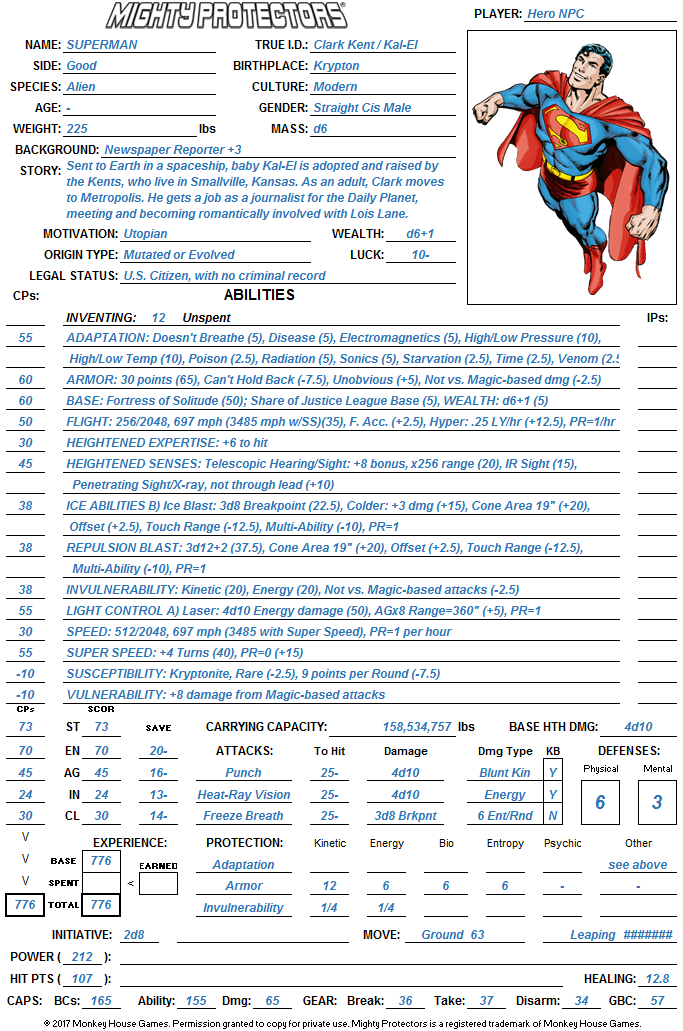 I made him strong enough to lift a battleship (which typically weigh about 115 million pounds). If he were to use a battleship as a weapon, i.e., pick it up and swing it down on a foe, he would do about 4d10+3d12+1 points of blunt kinetic damage. He could certainly have more than this level of Strength.

I  gave him Invulnerability to Kinetic and Energy damage types. This is on top of his already formidable level of Armor. However, one could argue that he should also have invulnerability to the Bio and Entropy damage types. I didn’t do that because, like I said, I’m not an expert and wasn’t sure if he was indeed “invulnerable” to those types of damage.

His “super breath” has two abilities: Ice Blast and Repulsion Blast; he has to pick which one he is using. To figure out the size of the ‘cone’ area effect, make the end of the cone up to 19″ long and draw lines from each edge to the square where he is standing.

Using his Super Speed, he can fly or run at about Mach 5. I gave his Flight the Hyper-Flight modifier because I believe he has been depicted as flying in space at faster-than-light speeds.

Superman’s Fortress of Solitude would contain the Bottled City of Kandor, a “zoo” of interplanetary creatures, various science laboratories, and an arsenal of weapons that he has confiscated over the decades.

Superman has other weaknesses that are not listed because he gets no points for them. They include: Personal Problem – Dependents Lois Lane and Jimmy Olsen; Susceptibility to Red Kryptonite (causes bizarre changes in his body and/or mind); and a Weakness that deprives Superman of his powers the longer he is removed from the solar radiation of Earth’s yellow sun.