Earth-970 is the name of my new Mighty Protectors campaign. The players start off with High Power characters at 200 CPs — they are the New Avengers.

Eighteen months ago, in the Winter of 1968, Galactus came to Earth seeking to feed upon its energies. Most of Earth’s superheroes, and even a few of its supervillains, came to New York City to defend the planet against the World-Devourer.

With the help of Odin and Zeus, Galactus was ultimately thwarted and driven away, but at a terrible cost. Much of the city, as well as places around the world, were devastated by the cosmic energies that were released during the battle. Many superheroes were killed, maimed or just plain disappeared, including most of the members of the Avengers, the X-Men, and the Fantastic Four.

The Wasp, one of the few Avengers who did not die fighting against Galactus, has decided to reform the Avengers, which she is calling The New Avengers. Using her wealth, she managed to track down four new heroes and has invited them to become members of the new team. These four heroes include: the Colossal Cabrakan, the Super-charged Stormfire, the Mighty Thane, and the Mysterious Vila.

Cabrakan’s Story: Cabrakan is a god and the son of Seven Macaw and brother of Zipacna. He inherited father’s arrogance and claimed to be the “destroyer of mountains.” The god Huracan asked the Hero Twins to defeat him; they poisoned and bound him, and buried him in a hole in the earth. After four thousand years he finally escaped his prison and has returned to the world.

Stormfire’s Story: The physicist Dr. William Wylde and law-school graduate Samantha Shields began dating several months ago. Unknown to Samantha, William was building an illegal and untested device to tap into dimensional energy. He invited Sam to his lab late one night and had her become his unwitting test subject. He tricked her into stepping into the test chamber and then sealed her in and began the experiment. She was bathed in mysterious energies from another dimension and imbued with the power of Lightning Control and other Abilities.

Thane’s Story: After Thor fell in the Battle of New York, the Vision picked-up Mjolnir and struck Galactus, wounding him. Galactus then destroyed the android and shattered Mjolnir with a burst of Cosmic energy. One of the Mjolnir shards struck Magnus Grantham, a History professor at the University of New York, giving him some of the Vision’s super abilities.

Vila Story: None so far. That’s why she’s so mysterious…

The PCs meet Janet Van Dyne, aka the Winsome Wasp, who gives the PCs a tour of the rebuilt Avengers Mansion. They are shown the ground floor, the 2nd level floor (mostly bedrooms), the 3rd floor hangar with its Quinjets, the basement, the sub-basement, and the lowest level of the base which houses the sub-pen (see submarine below) and the arsenal testing chamber.

When Col. Nick Fury calls, his face on the conference room’s giant Visi-Screen, the “real” adventure begins. It is based on an old MSH module “All This and WW II”. It involves the following plot points: getting a call from Colonel Fury, flying on the Quinjet to New Mexico to help S.H.I.E.L.D. put a new robot to the test, fighting off Nazi Commandos, arresting an age-defying Nazi scientist, and finding a Nazi time machine. 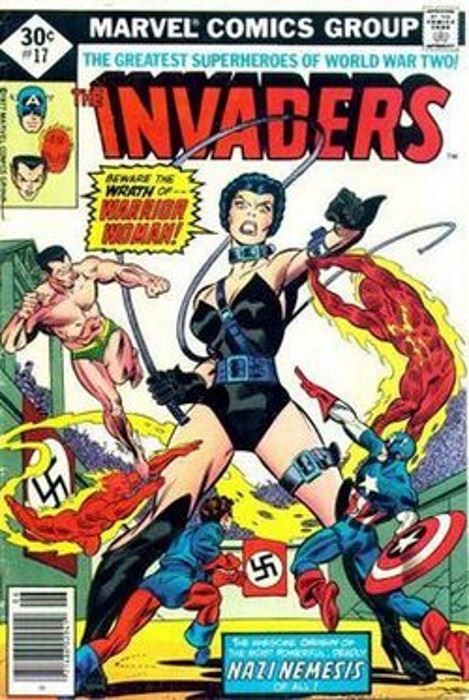 Using the time machine, the heroes travel back in time to 1943. They rescue an American General and his aide who where pinned down by Nazi soldiers. Back at the American outpost they meet the Invaders, which in this alternate timeline includes Excalibur (the PC, not the V&V hero). They learn that the Nazi time machines are located at either Hitlers hidden bunker or in a Romanian castle. The PCs pick the castle while the Invaders head off for Hitlers bunker. The PCs arrive at the castle where they fight and defeat many German soldiers and three Nazi supervillains: Baron Blood, Captain Nazi, and Warrior Woman. In Earth-970 it is Capt. Nazi, not Master-Man, who will be married by the Fuhrer. After their victory, the PCs fly back to the American outpost in Italy, where the General tells them he has someone who wants to meet them. Entering a back room, they see the Red Skull and the mind-controlled members of the Invaders waiting for them…

The characters Cabrakan, Excalibur, Stormfire, Thane, and Vila are subject to trademarks by their respective creators.

Use  of these trademarks is for commentary purposes only and is used under the Fair Use Act.