This page is under construction!

The devastation wrought by The Apocalypse had changed the very fabric of life on Earth. The weapons and devices used had completely obliterated some forms of life. Others were mutated to the point where they could not be recognized as what they had once been. Man was not immune to these changes…  — from the book “The History of Gamma World,” by Grand Historian Jaqard

Introduction: On this page I will be laying out the rules for a post-apocalyptic science-fantasy campaign using the new Mighty Protectors rules.

All starting player-characters are considered to be Low-Powered, starting with a total of 100 CPs and no more than 20 points in Weaknesses (Note that certain tech constructs, animal and plant mutants can exceed this amount).

The player characters so far include:

Place of Origin, Species, and Culture

Roll on the table below to determine the character’s place of origin, species type, and culture. 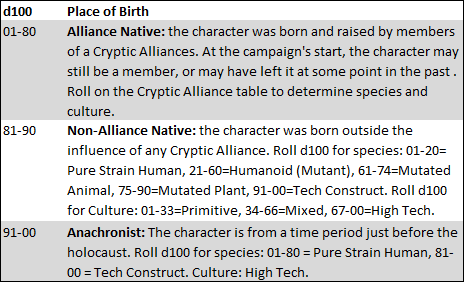 These “pure” humans are descended from the pre-2322 human stock, are mutation-free, and will be recognized by all pre-2322 robotic units. Many of the most powerful Artifacts are equipped with DNA locks and will only operate for pure strain humans. Basic Characteristics for PSH characters are capped: ST at 18 and the others (AG, EN, IN, CL) are capped at 24.

Pure Strain Humans roll their Abilities normally, but must include the (-5) Gear modifier.

Optionally, PSH characters may roll on the Artifacts chart to determine their gear, although this may not result in a balanced character.

Descended from mutated humans, humanoids without obvious physical mutations and possessing proper ID’s will usually be recognized by all but the most sophisticated automatons as authorized personnel. Roll character normally per the MP rules but be aware of restrictions on certain Abilities (see House Rules below).

Mutated Animals are descended from animals whose genomes were affected by radioactive and/or toxic substances found in the post-Apocalyptic Gamma World. Characters playing a mutated animal must pick or randomly determine their base Animal Type. They then must roll or select 2 species abilities and 1 weakness (see MP pg. 23).

Because Mutated Animals must roll on the Animal/Plant tables, they get (2.5) fewer CPs per Core Ability.

In Gamma World, Mutated Plants have gained sentience, mobility, and deadly mutations. Characters playing a mutated plant must select “Plant/Fungus” as their Plant Type. They then must roll or select  2 species abilities and 1 weakness (see MP pg. 23).

Because Mutated Plants must roll on the Animal/Plant tables, they get (2.5) fewer CPs per Core Ability.

The character is an android, cyborg, or robot. Because Tech Constructs are sentient, they are subject to Mind Control and Emotion Control. Because they are also machines, or part-machine in the case of Cyborgs, they are subject to being controlled by Lightning Control C) Gear Control (see MP pg. 54).

Tech Constructs may optionally roll on the Tech Abilities chart, but doing so does not guarantee a balanced character.

Androids are generally indistinguishable from humans. Androids roll their abilities on the Tech Construct Abilities chart. Androids get (2.5) fewer CPs per Core Ability.

Robots are sentient machines that come in various shapes and sizes but are most commonly in the form of a humanoid. Note that robots must sleep 8 hours each day to “recharge” their batteries. Robots do not heal on their own, but can be healed or repaired by others with an appropriate task check roll or Ability.

Many of the inhabitants of Gamma World have banded together into secret or semi-secret organizations called Cryptic Alliances. Some are remnants of organizations that existed in the Shadow Years… some are of very recent origin.

Age, Gender, Basic Characteristics, and Weight should be determined per the the Mighty Protectors rulebook.

Characters with a High Tech culture should roll Background normally (see MP p. 12). Characters with Mixed or Primitive cultures should roll three times on the following table, keeping two of them. Duplicates can be kept or re-rolled. 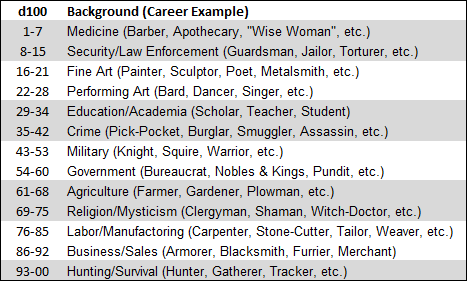 Legal Status: Characters begin the campaign with one of the following designations: Barbarian (or “free born” as they call themselves), Cryptic Alliance member, or Exiled (criminal, heretic, etc).

Abilities and Weaknesses should be rolled as usual with the following  exceptions:

To generate abilities and weaknesses using 1st edition Gamma World rules, click on the link below. However, doing so does not guarantee balanced character generation!

For a listing of high-tech weapons and gadgets, click Artifacts

For a listing of Gamma World vehicles and robots, click Vehicles/Bots