Hardpoint is a character that I initially had created for my brother’s campaign, using his homebrew Ultraverse rules. Here, I’ve converted him to the Mighty Protectors rules.

Hardpoint is a character one might get if you crossed Spiderman with Iron Man: a wise-cracking teenager wearing a powered-armor suit. Harry’s closest high school friends are members of the Math Club and include: Noah McCloud, Ethan Albaugh, Abigail Green, and Jian Mei. Abigail, who is also a cheer-leader, has been trying to go on a date with Harry but so far it’s never worked-out (his super-hero activities keep interfering).

He also works as a part-time technician at an electronics repair shop. His co-workers include: Adrian Kirby, Mary Walker, and Joe Caplan.

All of his suit’s Abilities, except for Armor, are breakable. If he takes hit point damage, roll a d6 to see which Ability is affected.

Hardpoint makes a good “vigilante” hero that licensed player-character heroes might want to track down, or might randomly run into if they are fighting against the Mob. Although he is considered a vigilante by the police, he is not a killer. When he defeats mobsters, he leaves evidence of their crimes and calls the cops.

Hardpoint is Copyright 2017 by B.K. Adams 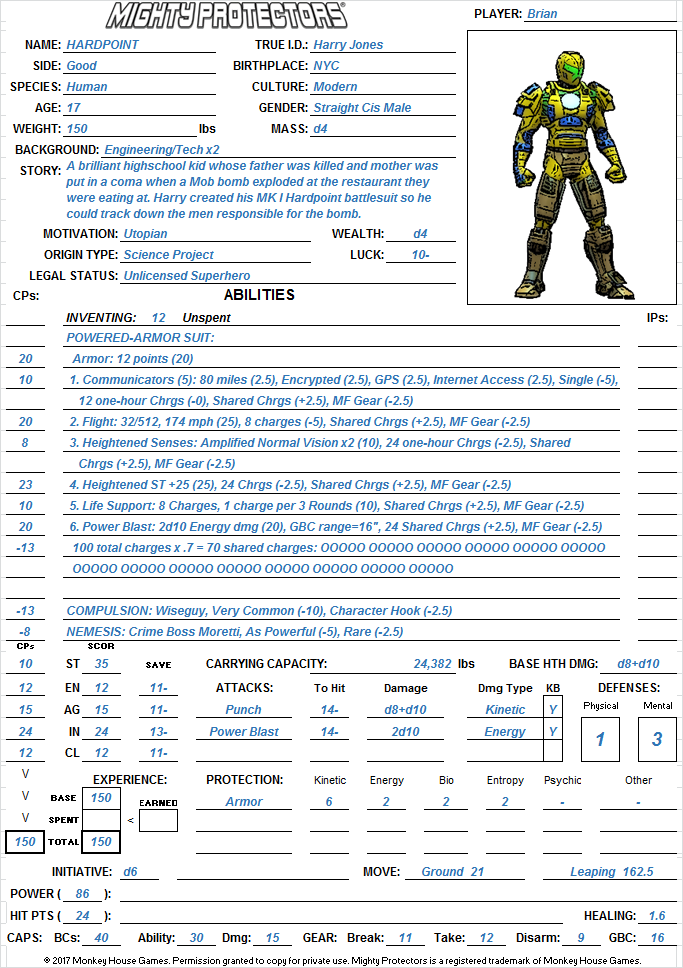