Here’s my Mighty Protectors version of Gollum. In the Lord of the Rings books he was described as being from a “hobbit-like” race, thus I gave him the Hobbit racial package.

Smeagol, as he was once called, possessed the One Ring for over 500 years. In that time he was transformed from a hobbit-like individual into a frog-like creature, “a skulking gangrel creature with an ill-favoured look,” (Distinctive weakness) with his skin becoming tough and slimy (Armor), his eyes growing larger enabling him to see in darkness (Amplified Vision), and his sense of hearing and smell greatly increased (Heightened Senses).

Whether or not his ability to crawl down sheer cliff faces is a result of the Ring, or his own intrinsic ability, is unclear but at the edge of the Emyn Muil hills Gollum climbs headfirst down a sheer cliff “like a spider” — thus the Wall-Crawling ability. Gollum is thin and wiry and is described as being “far stronger than he looks,” thus the Heightened Strength. Lastly, he is a biter (Natural Weaponry) and a strangler (Heightened Expertise: Specialist with Choking), who often “throttled” to death any orcs unfortunate to have wandered down near his cave.

Gollum is a slave to the power of the One Ring, thus the Compulsion weakness of being unable to abandon the Ring. He can temporarily resist this effect with a CL save @ -4, as he does when he is sometimes helpful to Sam and Frodo, but ultimately he reverts to type.

He screams “it burns us!” when Sam tied one end of his elven rope around Gollum’s ankle, thus the Susceptibility weakness. He has no money (Poverty) and seems to be a very unfortunate individual (Unlucky).

I created the Split Personality weakness to represent, as Sam calls them, his “Slinker” and “Stinker” personalities, which you can see below:

I only give him a total of (-20) CPs for all of his weaknesses, although if you added them up — the number would be far greater. 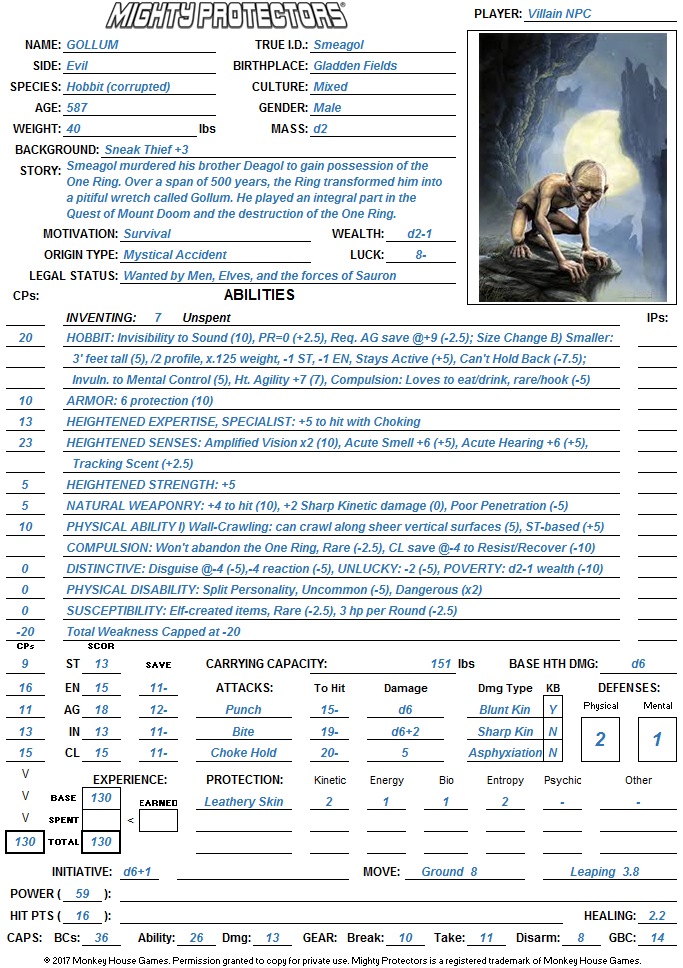 Gollum is a trademark owned by the Tolkien Estate. The depicted artwork is off of the internet; I don’t know who the author is. No challenge to the copyright or the trademark is intended.