Sir Justin, who later comes to be known as the Shining Knight, was once a member of the Knights of the Round Table in King Arthur’s Court. He was one of many knights who witnessed the death of Sir Fallon, Queen Guinevere’s cousin, at the hands of an ogre named Blunderbore. Sir Justin then vowed to avenge Sir Fallon’s death and began a quest to hunt down the ogre.

While on his quest  he came across the wizard Merlin who was trapped in a tree by a witch. Sir Justin freed the wizard who then thanked the knight by casting various enchantments. His rusty armor and weapons were turned golden and made “invulnerable.” His sword was made so powerful it could “cut through anything” as well as remove any magical enchantment. Merlin then enchanted Sir Justin’s horse Victory, so that it grew giant feathered wings, enabling him to fly.

Sir Justin left Merlin and continued on his quest to the northern lands. He eventually locates Blunderbore — and defeats the monster in combat. Before dying, however, the ogre caused an avalanche that buried himself, Sir Justin,  and his horse Winged Victory. Neither Sir Justin nor his steed were killed, however. Instead, they spent the next 1500 years in suspended animation, only being discovered and re-awakened by a museum curator in the year 1941.

Realizing that he must now live in the modern age, Sir Justin decides to use his knightly skills and enchanted abilities to become a crime-fighter. He eventually meets heroes like the Crimson Avenger and Vigilante and others who form the Seven Soldiers of Victory. Later, he is invited to join the All-Star Squadron. 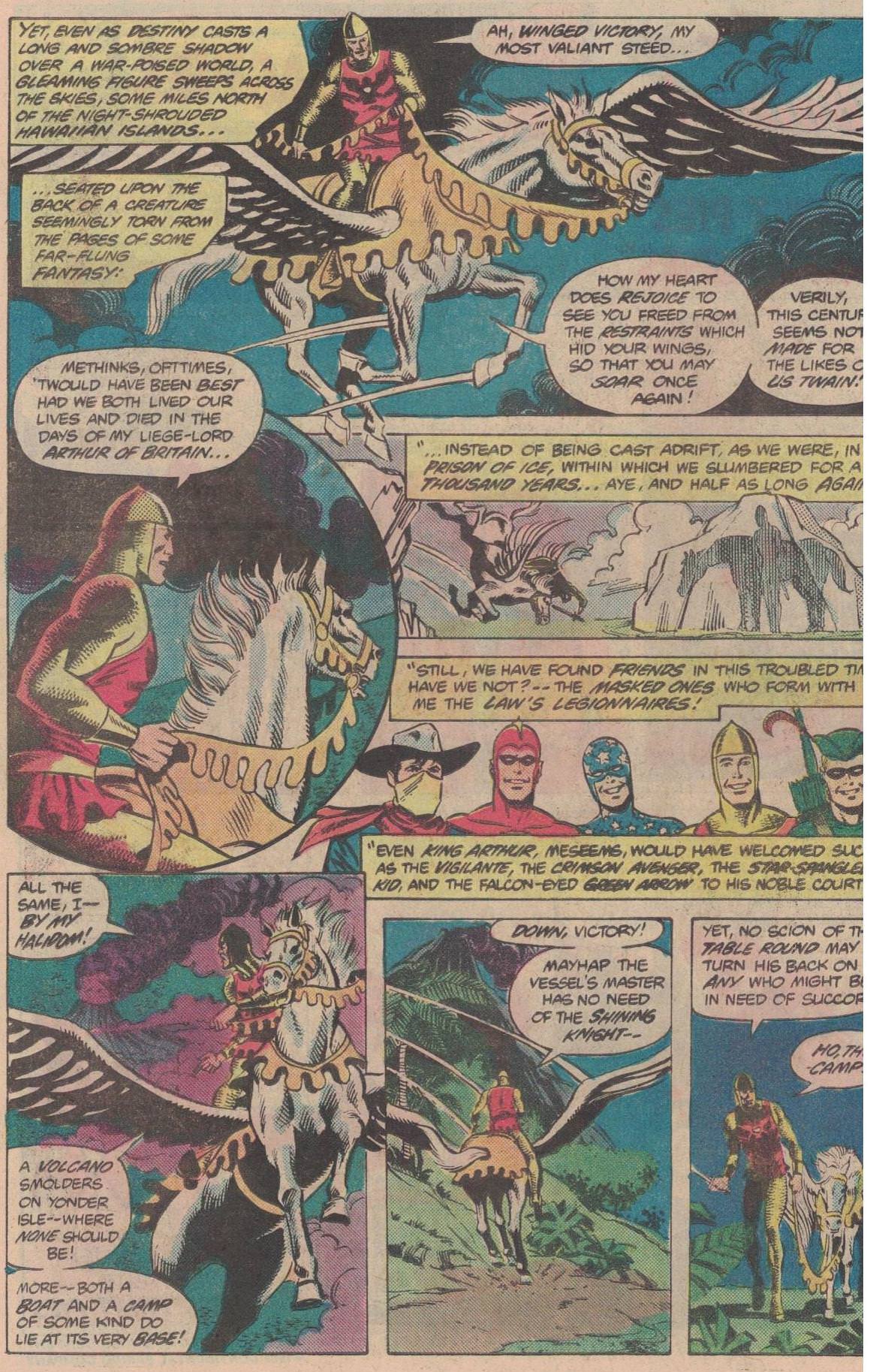 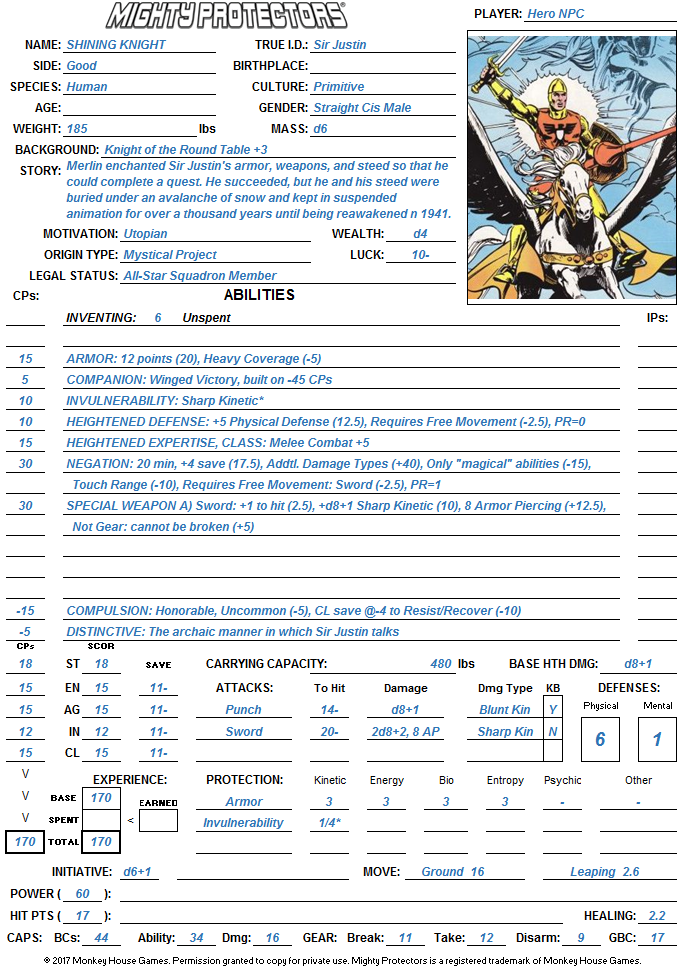 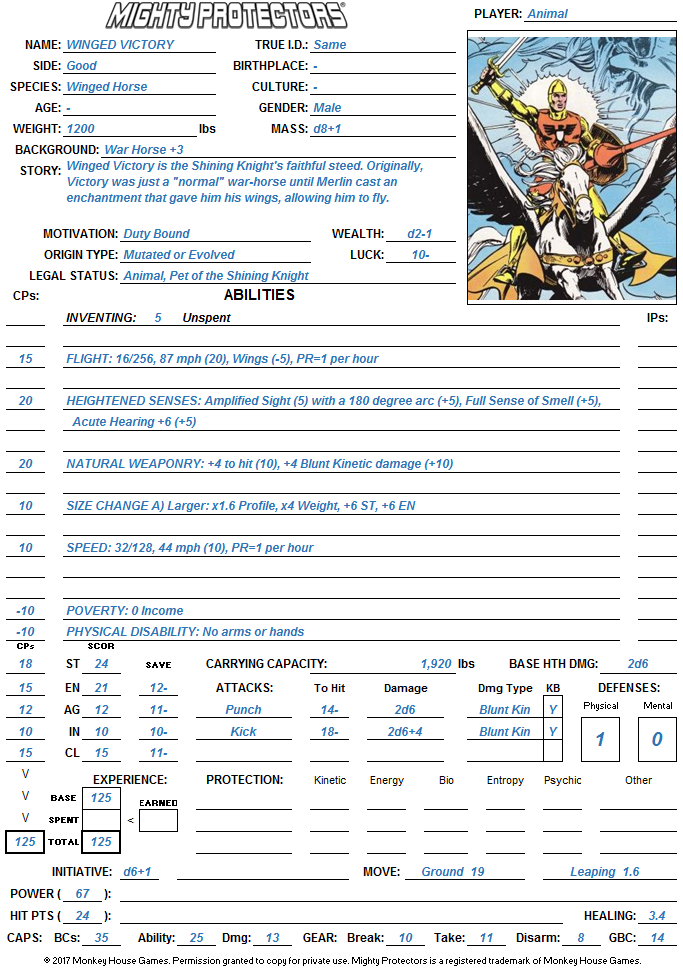 Sir Justin’s enchanted suit of chain mail has some protection against damage, but it also has Invulnerability to the Sharp Kinetic damage type. Arrows, swords, bullets, or any other sharp kinetic damage is reduced to 1/4 of its total after armor protection is applied. His Heightened Defense ability is how I am representing is unbreakable shield. It is not gear, per se, as it cannot be broken, but it requires some room to use and it can be taken from him. Likewise, his enchanted sword has the Not Gear modifier, making it unbreakable (but it can be taken away). His sword also has the Negation ability, able to negate almost any ability as long as that ability is magical in nature.